Pedego Electric Bike Tours On The Santa Monica Coastline And Historical Highlights Along The Way! 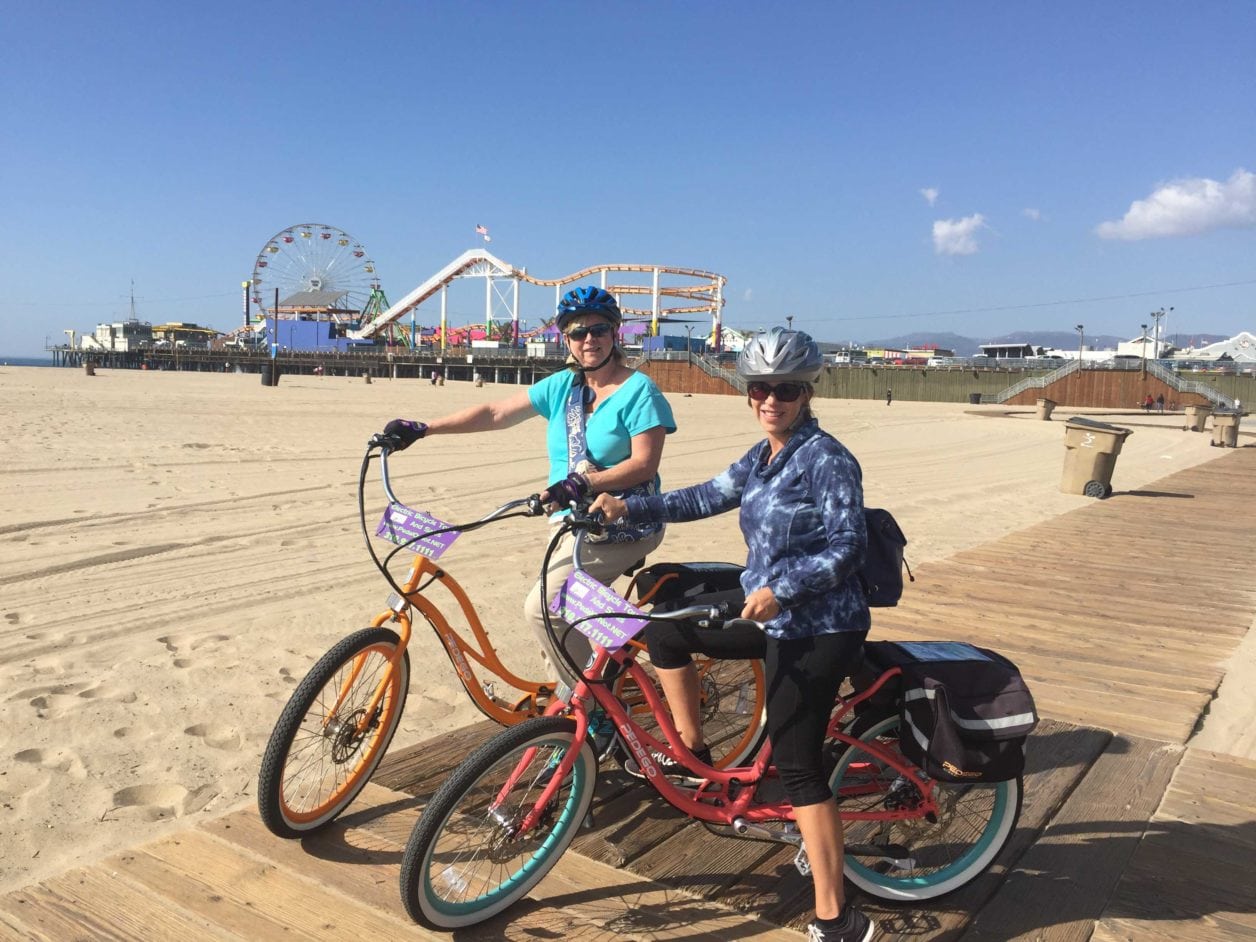 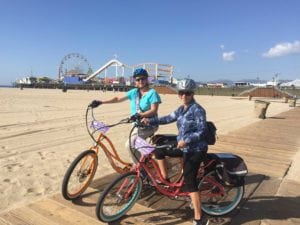 For anyone looking for something fun and different to do in the Santa Monica area, this is it! Not only do you get to glide along the coast with the sea breeze on your cheeks, but doing this on an electric bike, makes it a joyful ride indeed.   The bike pathway meanders next to the sand with views of the water on one side, and the Boardwalk, hotels, and cliffs on the other side. It is a spectacular view in every direction. I could feel myself relaxing in the first five minutes of our ride.

Come enjoy a private tour, get some exercise and learn about the grand history of this area. The tour guides are frequently one of the Owners of Pedal Or Not, Inc. and they have a wealth of information. On the beautiful day we were out, we had the pleasure of Barbara’s company—sharing her extensive knowledge with us while we marveled at the sights and history that Santa Monica area has to offer. Barbara has a photo book that she has complied with historical pictures of the various sights. Guests can see a particular point of interest as it looks today and then take a step back in time to see what it looked like “back in the day”. If you are a history buff, as I am, that was really a fun experience to see and gave me a larger appreciation for Santa Monica and all its grandeur.

The bikes are super easy to ride and each beach cruiser is equipped with full suspension and comfortable seats. The bikes allow you to choose between pedaling (6 gears), electric motor power (a twist of the wrist) or both. The lithium power assist system ensures that you’re never far behind and although this ride is basically flat, but if you wanted to go up a hill, this sure makes it easy enough to do that. Just pedal…or not!

Here are just a few of the many highlights we enjoyed and some pictures to give you a sense of what our custom guided bike tour was like. (Details about the tours and how to book one then follow…)

The town of Santa Monica once belonged to Rancho San Vicente & Santa Monica and Rancho Boca de Santa Monica. According to Wikipedia, the Sepulveda family sold 38,409 acres of Rancho San Vicente & Santa Monica for $54,000 in 1872 to Colonel Robert S. Baker and his wife, Arcadia Bandini de Stearns Baker. Baker also bought a half interest in Rancho Boca de Santa Monica. Nevada Senator John P. Jones bought a half interest in Baker’s property in 1874. Jones and Baker subdivided part of their joint holdings in 1875 and created the town of Santa Monica. The town site fronted on the ocean and was bounded on the northwest by Montana Avenue, on the southeast by Colorado Avenue and on the northeast by 26th Street. The avenues were all named after the states of the West and the streets were simply numbered. The first lots in Santa Monica were sold on July 15, 1875. Jones built the Los Angeles and Independence Railroad, which connected Santa Monica and Los Angeles and a wharf was erected out into the beautiful bay. Today the Santa Monica Bay is home to some of the most famous beaches in the world including: Malibu Lagoon State Beach (Surfrider), Will Rogers State Beach, Santa Monica State Beach, and Dockweiler State Beach.

As we headed northbound we came across a charming painted building at the foot of the Newcomb Pier which is adjacent to the Santa Monica Pier. One can’t miss this beauty— housing a colorful, historic carousel. It is a well-preserved throw-back indeed. Kids still squeal riding it and we had great joy watching them having such fun. According to Wikipedia, the carousel was housed in The Santa Monica Looff Hippodrome. It was designed and built in 1916 by Charles I. D. Looff and his son Arthur to hold the Looff Carousel. Looff’s carousel was housed at the Hippodrome until it was sold in 1939. It was replaced by the Philadelphia Toboggan Company Carousel #62, which was moved from the Ocean Park Pier. The building remains a rare example of structures that used to be on the amusement pier. Scenes were filmed therein for the 1973 award-winning film, The Sting. Since 1977, the carousel has been owned by the city, and went through a four year renovation beginning in 1977. It was declared a National Historic Landmark in 1987.

Another special spot is pedaling our bikes through The Venice Canals. There are some great pictures of days gone by can be viewed at this web site: https://www.westland.net/venice/canals.htm . Located just south of Santa Monica, it is fun to ride bikes through the canals, bridges and roadways of Venice. Many of the homes have been renovated, while others have been rebuilt from the ground up. The architectural style of the homes ranges from tiny beach cottages, to ultra-modern structures of glass and metal and everything in-between. Ducks wiggle and waggle their way along the sidewalks and down into the water. It is a charming enclave surrounded by busy traffic and bustling neighborhoods.

Can you imagine obtaining a town based on the toss of a coin? Well meet Abbot Kinney (1850 – 1920). He was a wealthy tobacco mogul, world traveler and co-owner of the Ocean Park Casino and Resort and he envisioned a resort town culturally reminiscent of Venice, Italy. Kinney and his partners purchased all the land south of Ocean Park. After the partnership dissolved, the split was determined by a flip of a coin and Kinney won the toss. He chose the marshy southern half of the property. In 1904, Kinney acquired a landscape architect and town planner from Boston and Kinney and his staff drew up preliminary plans. The original 16 miles of canals were dug in 1904 under the direction of Abbot Kinney. Man and mule worked around the clock to dig the canals in time for the grand opening of Venice on July 4, 1905. When Venice of America was first conceived by Kinney, life was literately in the horse and buggy age. By the twenties, the automobile had made its mark and was here to stay. The canals were not practical for the horseless carriage. In 1929 the majority of the canals were filled in and converted to roadways. Sadly, few of the original canals remain today. But it is still very entertaining to ride through the area and see the remaining canal, bridges and unique homes that dot the canals.

The Annenberg Beach House is a regal structure that sits right on the strand with commanding views.  On the day we visited this historic site, they were doing a photo shoot, so we were not able to spend much time in the pool area. On the far north end of the property still stands the Guest House which is made of wood siding and dressed all in white with a perfectly manicured lawn. Just south of that was a parking area, and then where the mansion once stood, there is now a much more modern building and gigantic pool and lounging area. It is quite often rented out for private functions and photo shoots and in the summer the pool is open to the public. It is now called the Annenberg Community Beach House.

The 5-acre oceanfront site upon which the Beach House now sits was originally developed during the Gold Coast era of the 1920’s by William Randolph Hearst for actress Marion Davies. The Davies estate featured a mansion of 100-plus rooms and an ornate marble swimming pool. It was a hot entertaining luminaries from the Hollywood set, such as: Charlie Chaplin, Louis B. Mayer, Samuel Goldwyn, Greta Garbo and Clark Gable. The property changed hands and identities over the years and in the 1990’s, the City of Santa Monica ran the facility, known as ‘415 PCH,’ until the 1994 Northridge Earthquake severely damaged all structures on this site. Wallis Annenberg of the Annenberg Foundation, held fond memories of visiting there and in 1998 when she learned of the City’s struggle to identify funding to realize its vision for a year-round public beach facility, she enthusiastically offered to help. The Annenberg Foundation provided a $27.5 million grant that paved the way for the site’s rehabilitation. For more fabulous history and photos about this Grand Dame, please visit this web site: https://www.annenbergbeachhouse.com/about/the-beach-house-story.aspx

Who can ride along this stretch of the coast and not go visit Muscle Beach? It is literally a GYM, right on the Boardwalk and sandy beach. I did not realize this, but Muscle Beach was originally located in Santa Monica and later was relocated to Venice Beach where it now resides. It is a serious crowd inside the pens, but fun to watch them working out , or entertaining us, or sometimes both!

Details About The Tours-
The tours are semi-private tour (limited to 2 to 5 people) and they use their rainbow fleet of STEP-THRU Pedego electric beach cruisers. Both custom and private tours can certainly be arranged too. The bikes are easy to operate and it just takes a few minutes to get the hang of riding them (as long as you can ride a bike, of course). The incredibly fun 2-1/2 to 3 hour tours operate daily and the cost starts at $79 per person (including the bike and equipment). Guests can choose from two time slots for bike tours: at 10:00 am (the ideal time to ride) or 2:00 pm (for an afternoon ride). Riders must be 13 years of age or older.

Dining In The Area-
Just steps away from the store along Main Street, there are endless eateries, bars, coffee shops and boutiques to explore enjoy after your bike ride. It is a bevy of activity at all times of the day and evening.

Parking Information:
Approximately 100 feet from the store is 2nd Street. Turn right on 2nd Street.   Go 100 feet to the corner and turn left on Marine. The parking lot entrance is 100 feet on right hand side (approx. $7). 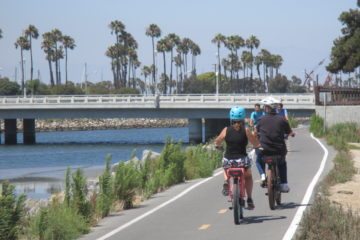 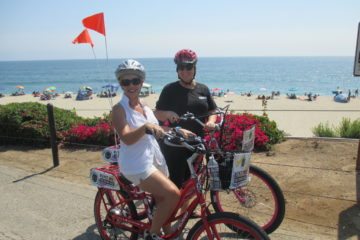 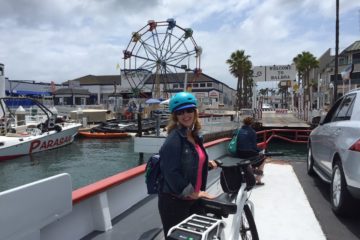