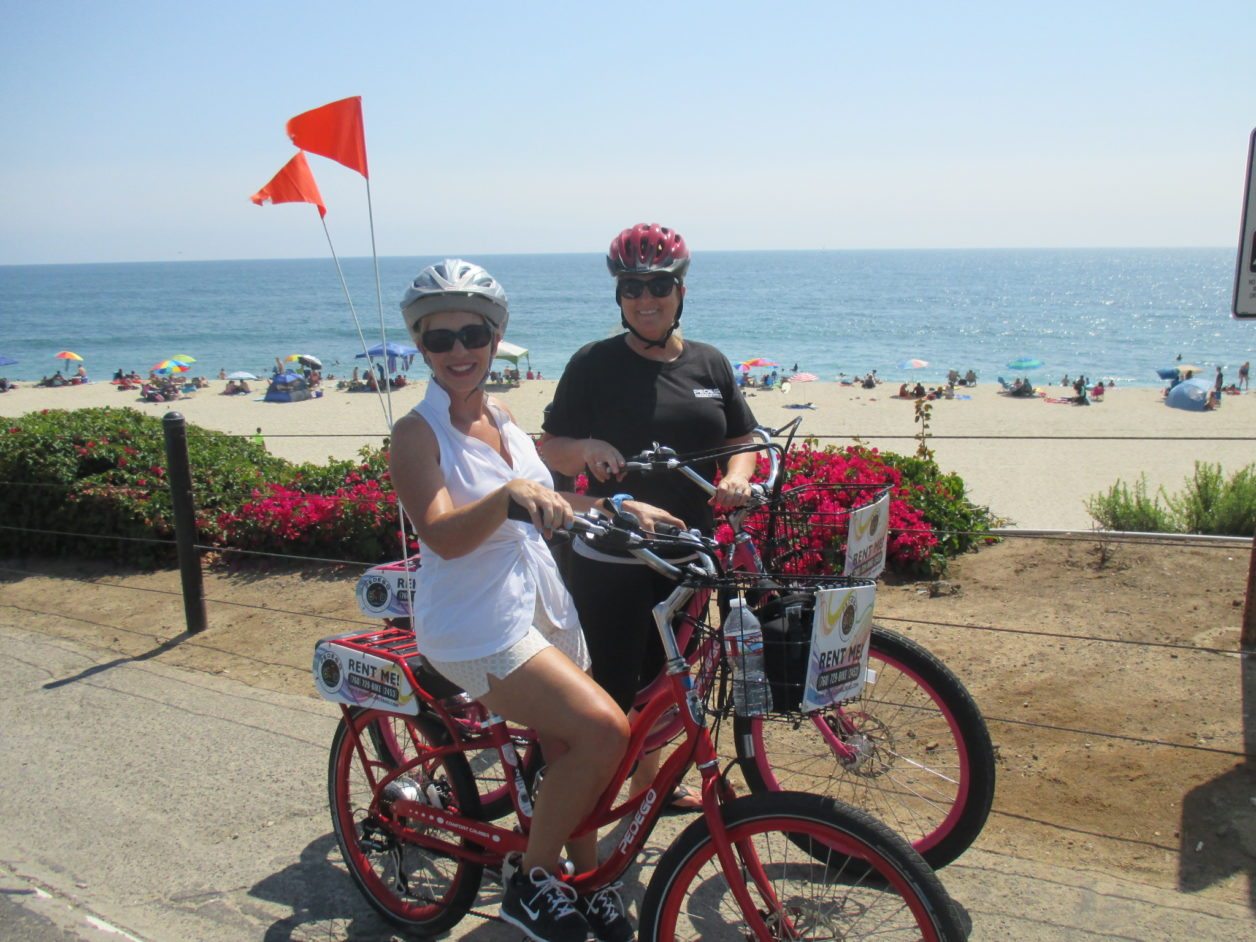 From Carlsbad To Encinitas….Pedaling Is A Breeze On An Electric Bike with Pedego of Carlsbad!
Carlsbad is a seaside resort city occupying a 7-mile stretch of glorious Pacific coastline in northern San Diego County, California. Locals referred to it as “The Village by the Sea” and it is a mega-tourist destination. {As a quick frame of reference, the city is 90 miles south of Los Angeles and 35 miles north of downtown San Diego. It is sandwiched between Oceanside to the north, and Leucadia/Encinitas to the south.}

Along Carlsbad Village Drive, and just a stone’s throw from the ocean and Carlsbad Boulevard jaunting north and south, is the retail store, Pedego of Carlsbad. This is a friendly bike shop specializing in electric bikes. Riding electric makes it so easy to maneuver up and down hills, and ride much longer distances. The showroom has many various models of Pedego electric bikes for sale, they service bikes on-site, have add-on accessories, do bike rentals, and they even do guided bike tours. On this fine summer day, we were treated to a great tour, guided by Denise who is one of the owners. Guided Tours Pedego Carlsbad offers four different guided tours. If 1-3 guests are riding as a group, they use head-sets to communicate points of interest along the way. If there are more than three guests, the guide stops more frequently, however, do not use the head-sets. Step-By-Step “Dali Lama Tour” We decided to do the Dali Lama Tour since it would take us along the lovely coastline, through two charming towns just south of Carlsbad and along historic old Highway 101. We have never ridden along this stretch since we typically find ourselves cruising south by car on the 5 Freeway. This ride takes approximately 2.5 hours, or a tad more, depending on how many times you stop for photos and ice cream! Call for cost of a guided tour  and it includes the bike rental.

This overview and series of photos will give you the reader enough information that you could rent bikes, print this out, and conduct your own “self-guided tour” very easily. This is one of their most popular tours. I might suggest that if you are new to using an electric bike, you might want to spend a few minutes in the back parking lot getting comfortable on the bike and learning how to use the throttle and brakes. It is easy but the nearby streets are busy, so it is best to be comfortable before heading out.

So put your helmet on and here we go! Let’s get started on the tour…

You know you are entering the charming town of Leucadia when you smell the old Donut Shop on the right and then see the iconic yellow building of the Pannikin Coffee & Tea House greeting you. This is a small town which reminds everyone of the old days when this was the main route north and southbound. . (See below for history.) So there you have it. Carlsbad has so much to offer and there is nothing better than seeing all that behind the handle bars of a Pedego bike. With the wonderful scent of the sea and the wind in your hair, this is an instant vacation. Hello Fun! A Brief History Lesson On Points of Interest-

Pannikin Coffee & Tea– Built in 1888 the Pannikin is located in this historic Santa Fe Railroad Station on historic Coast Highway 101 which is now painted a bright yellow with white trim. They are family owned and have been serving the community since 1968. They roast coffee and yummy baked goods daily for all four of its San Diego locations. It is worth a quick stop.

Boat Houses on Third Street- On a quiet street of quaint beach houses and mismatched cottages you’ll suddenly find yourself confronted by two ginormous boats – most definitely in dry dock since they’re situated two blocks back from the beach. Built by architect Miles Kellogg in the late 1920’s he used timber salvaged from the local bathhouse and a hotel that failed to survive Prohibition’s dry years (the 1888 Moonlight Beach Dance Parlor). They have never been to sea, despite their 19 portholes, mariner’s wheels and quirky starboard list. The SS Encinitas and SS Moonlight have only been homes. Each house is 15 feet tall by 20 feet long and approximately 1,100 square feet. The Encinitas Preservation Association purchased the houses in 2008 and currently rent both out as private dwellings. But once that income has paid off the loan, the plan is to turn them into a small museum for the public. (The Boathouses are part of our Guided Downtown Walking Tour starting at 10:00am every third Saturday from September to July. They are located at 726 and 732 Third Street.)   Source: http://www.encinitashistoricalsociety.org/the-boathouses.html

Carlsbad Aquafarm- Carlsbad Aquafarm cultivates Mediterranean Blue Mussels, Pacific Oysters and Ogo. The company has been in operation since 1990 in Carlsbad. The farm has developed a secondary line of products for the marine aquaria trade known as “live-feed” that includes micro and macro algae, copepods, amphipods and brine shrimp. The farm uses sustainable suspended long-line cultivation methods that cause minimal impact on marine habitat, wild fish populations, water quality and the marine environment. Rigorous laboratory testing standards and ultra-violet purification systems help ensure product safety while close proximity to t LA and San Diego. This allows for a quick turn-around from harvest to delivery to wholesale clients in Southern California. The result is fresh, high quality products with a small carbon footprint. Carlsbad Aquafarm products are sold exclusively to wholesalers.

Dr. Seuss– I had no idea that Dr. Seuss lived in La Jolla and the unique shape of the trees gave him inspiration for his drawings.

The Encinitas Temple is a branch of Self-Realization Fellowship (SRF), an international religious organization founded in 1920 by Paramahansa Yogananda to disseminate the universal teachings of Kriya Yoga, a sacred spiritual science originating millenniums ago in India. The nearby Encinitas Ashram Center and Meditation Gardens were established by Paramahansa Yogananda during his lifetime, and have become a center of pilgrimage for thousands of people each year, who come from all parts of the globe to visit the site where this great world teacher lived, worked, and communed with God. Born in India in 1893, Paramahansa Yogananda has come to be recognized as one of the preeminent spiritual figures of our time and is often referred to as the “Father of Yoga in the West,” his Autobiography of a Yogi is widely regarded as a modern-day spiritual About Self-Realization Fellowship

Shortly after Paramahansa Yogananda received the gift of the Encinitas Hermitage, he began plans for the construction of the Golden Lotus Temple, which he dedicated on January 2, 1938. The temple was designed by Paramahansaji himself with the intention of revealing as much as possible the panorama of nature’s beauty. Magnificent views of sea and sky were afforded by the four-story glass observation tower and immense windows overlooking the Pacific Ocean, which was visible directly behind the low altar. During the next four years, thousands attended the Thursday and Sunday services conducted by the Guru at this site (in the present-day Meditation Gardens). In 1942 the erosion of the shoreline caused the Golden Lotus Temple to become unstable, and sadly, it subsequently had to be removed. There is a plaque there today commemorating the site of this temple. Note: Pictures of the Temple are available on their web site.

So How Did Carlsbad Get Its Name? In the 1880’s a former sailor named John Frazier dug a well in the area. He began offering his water at the train station and soon the whistle-stop became known as Frazier’s Station. A test done on a second fresh-water well discovered the water to be chemically similar to that found in some of the most renowned spas in the world. The town was named after the famed Spa in the Bohemian town of Karlsbad in Czech Republic. Source: Carlsbad Historical Society http://www.carlsbadhistoricalsociety.com/

Couples Romantic Picnic- 3 hours  and call for costs- Enjoy each other’s company while you soak up the sun, bike ride to the beach, and surround yourself with breathtaking sights. Pedego Carlsbad will provide the items needed to kick start your picnic so that guests can have the freedom to create their own getaway, including: two comfortable electric bikes with a basket, beach towels for relaxing by the sea, speakers to play both iPhones and MP3 devices, a keepsake cooler for complimentary bottled waters and deli sandwiches made by one of our local deli’s (selecting from a menu), and a keepsake Pedego sports watch to remember the day of fun. Guests pick up their Pedego bike between 10:00am and 2:00, and keep the bikes for up to 3 hours. They must be returned to the shop before 5:00pm.

Lookout Tour 1.5 hours- call for costs- This tour lets riders see first-hand what makes Southern California special. Ride alongside the historic Highway 101 where the highway hugs the Pacific Ocean. Enjoy a Look Out Point with commanding views of the Pacific ocean below. Great at sunset!

Oceanside Pier Guided Ride 1.5 hours- call for costs- Riders will cruise along the ocean and through quaint neighborhoods while your guide shares fun facts and relevant information on California. The first stop is the house where Top Gun was filmed. From there they head to the Oceanside Pier, the longest wooden constructed recreational pier on the west coast. It is visited by over a million people a year and guests will learn the history of this legendary pier. Often times seals and dolphins are spotted. From the pier, riders will cruise along to Oceanside Harbor to the village filled with shops, eateries and a lighthouse. The Harbor is known for sports fishing, boating and other water oriented activities. (This tour is best for more experienced riders given the busy roadways.) 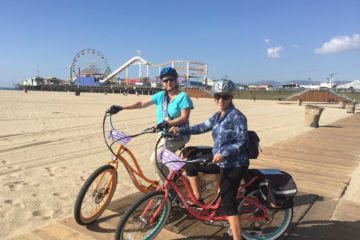