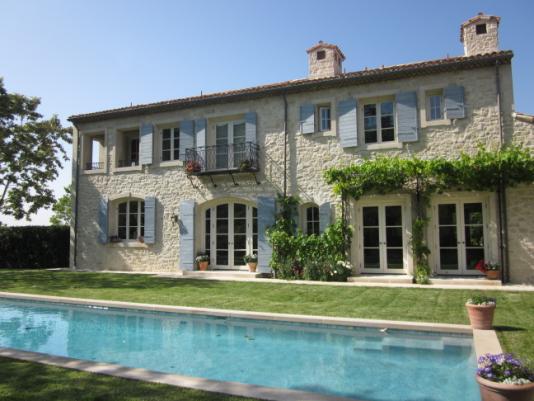 The day was filled with exceptional gardens in Cameo Shores, Newport Beach, Newport Coast, and Shady Canyon. This tour never disappoints, and on this day in May, the sun shone brightly, and the  “garden gnomes” graced us with such amazing sights. It was hard to know what to look at first, as our eyes danced from plants we had never seen before, to a comfy hanging chair, to expansive green lawns & pools, family vegetable gardens, and even a children’s zip line. Now this is living!

As we passed the ornate wrought iron gate, and gingerly crunched our way across the gray-topped gravel, we met upon what I considered to be the most special garden of the day. This home had been inspired by the owner’s trips to France, and to Provence specifically. They had hired architect Rik Ratzmaier of Katzmaier Newel and Kerr to bring their concept to life, and what a fine job he and his team did, indeed.

Entering the courtyard, we were met with a lovely Wisteria-laced gazebo, with tables and chairs underneath. It was all set for comfortable conversation. Around the corner was a full-sized “boules court”— otherwise known as pétanque— and is quite similar to the Italian version called bocce ball. We could just imagine the fun that was had on that court during the long summer evenings.

As we followed the path the greenery opened to reveal an expansive grass area with a lovely pool in the center. It was then that we could take in the full sense of the architecture of the home. It was lovely with limestone walls in a soft cream color. And my favorite faded-blue shutters adorned each and every window around the entire home. How they ever refined that “just weathered” look, I am not sure.

Behind the wall of eight foot hedging was a quiet spa mediation garden, complete with a fountain. As explained by the owner, this was a gesture to a fountain they had liked at a hotel in Le Baux, France. We danced our way across the lawn and pool to the next treat.

This next area was more of a formal garden, hugging along the Villa’s walls and picture windows.  This featured a fish pond, beds of roses, and 20” tall pruned box hedges in geometric formation resembled the look of French and English gardens. Beyond that was a huge grass area with a lovely tree in the corner. In perfect position it stands at attention, without blocking the view beyond. The acre of land is nestled against the nature preserve and a creek gently flows in the caverns below—and natural vegetation, trees, and shrubbery and cactus abound in this wooded wonderland blanketing the hillsides.

As we rounded the corner we entered what seemed to be the real pulse of this garden treasure. Here we found a beautifully adorned gazebo with comfortable wooden benches and tables  for outdoor dining and relaxing. The roof was thatched with two types of Morning Glories crawling all over the roof and sides. Large tree trunks stood like poles on all four corners to hold the structure securely. And to the left we found ourselves roaming through the owner’s extensive vegetable and fruit garden. There were five raised planters for growing seasonal vegetables, and an area for working and composting. There was zucchini, green peas, corn, strawberries, blueberries, and  fruit trees as well.

As we returned back to the entry, I realized there were four distinct garden areas that were expertly executed here. There was the recreation area—with pool, pétanque, and wood-fired oven. The second was the spa and mediation garden just adjacent to the fitness center. How convenient! The third was the centerpiece–with views from their living room. With a more formal garden up close to the house, and that expanded to a large, open grass area and the nature preserve beyond. Exquisitely cast! And lastly, there was the gazebo sitting area, and vegetable garden. It was a day in Provence, indeed. A splendid day,  and a nice reminder of things to come on my trip to Provence this summer!

The Game Of Boules
Source: www.discoverfrance.net/France/Sports/DF_boules.shtml

The game of boules, otherwise known as pétanque , is quite similar to British lawn bowling or Italian bocce  ball. The French version is traditionally played with metallic balls on a dirt surface beneath plane trees, with a glass of wine, or pastis at hand. The local boulodrome is the social gathering spot in southern France. The object of the game is to throw your balls — usually with somewhat of an arched back-spin — so that they land closer to the small object ball (cochonnet ) than those of your opponent, or strike and drive the object ball toward your other balls and away from your opponent’s. 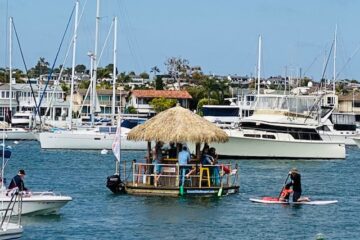